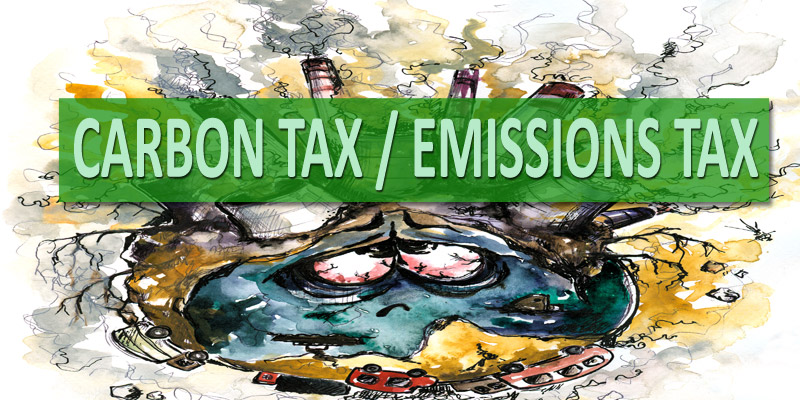 The Difference between a Carbon Tax and an Emissions Tax

What is a Carbon Tax?

The environmental community has been talking about a carbon tax for many years. A carbon tax simply puts a price on carbon dioxide emissions, usually at a set rate per ton. That price can range from $15 a ton to caps of $50 a ton. When calculated out, that only equates to 17-57 cents per gallon of E10 gasoline (10% ethanol gasoline). For CO2 emissions at coal fired power plants, or 1.5 to 5 cents per kilowatt hour in added tax or fee.

This is not enough to change consumer behavior, we’ve seen in the past when the price of oil has risen sharply.

Many different plans have been discussed for implementing a carbon tax. Most involve industry paying at point of extraction a tax, or fee, and then receiving a payment, or dividend at the end of the year. This is often called a “Carbon Dividend”.

This fee on fossil fuels such as coal, oil, and natural gas can be tricky as not all inventories are used in the same way. An example is that some oil is used for heating, some for gasoline, and other for plastics. Coal also has different carbon emissions depending on whether it is used for electricity generation or for steel manufacture. A Carbon Tax is set upon pricing resource extraction, not resource utilization.

Further, Carbon Taxes and Dividend plans are being funded by sources such as Exon Mobil (1 million dollar joke – via Bloomberg) and other fossil fuel companies. An integral part of these plans exonerates (Exon….. get it) these companies from damages cause by climate change.

Specifically, Bloomberg has replied, “We are not taking unsolicited submissions”. Perhaps their financial interests and advertising revenue require they be selective.

Does Michael Bloomberg just want to promote his lame book, “Climate of Hope”, not to sell copies, but to control the conversation?

What is an Emissions Tax?

An Emissions Tax is a new plan proposed by the founder of EmissionsTax.org, Robert Tanguay. It aims to put a price on all pollution emissions, not just carbon dioxide. Initially focusing on Greenhouse Gas Emissions such as CO2, unlike Carbon Tax plans, it also includes Methane, Carbon Monoxide, Nitrous Oxide and Fluorinated Gases. While pricing of these emissions has not been fully discussed, it will be much higher than Carbon Tax proposals.

Since pollution also causes health issues, an Emissions Tax would put a price on Particulate and Chemical Emissions, and eventually calculating the impact of electronic signals, and unnatural sound/light emissions. Go here for a complete list of the Types of Emissions that will be monitored. The moral argument is based on tort law – if a group or individual causes harm to another, they are responsible for compensating that damage.

Unlike a Carbon Tax, an Emissions Tax would be added at point of consumption. In other words, pollution would be priced at point of emission. This is a far more precise method of pollution control only now available with today’s current technologies of internet enabled sensors, data analytics and artificial intelligence.

In order to balance the increased energy costs, a unique feature of an Emissions Tax would be to reduce income taxes. While this would have to be done federally, states could start by cutting sales tax or property taxes. This allows efficient consumers to experience savings throughout the year instead of bearing the full costs up front, waiting for an unknown dividend check yearly.

The final leg of an Emissions Tax is the reinvestment in infrastructure and social programs. This creates jobs. Machinery requires energy and energy kills jobs. Funds would be available to increase Social Security and Medicare plans to alleviate increased costs. More jobs would be created as human labor becomes more competitive when compared to polluting technology.

A good example is a person using a rake compared to a leaf blower. While the rake takes longer, it is more accurate and less polluting in both sound and exhaust. Here’s a video example with a ride on lawnmower and pollution dumping, Trump style.

Incentives and the Environment

Read my new book, “Incentives and the Environment” to learn about why we hurt the environment (in parts for free) even though it is not the best for us.

Brief Comparison of a Carbon Tax and Emissions Tax

In essence, a Carbon Tax is narrow and only de-incentivizes a small percentage of pollution (CO2). I would argue that it will actually incentivize and further fund polluting industries and groups, but we will save that article for another day.

An Emissions Tax is all encompassing when it comes to pollution and the externalities that plague a capitalistic society. It rewards efficiency and provides incentive not to pollute, for all people, not just the elite interest. I hope you will come to the same conclusion.