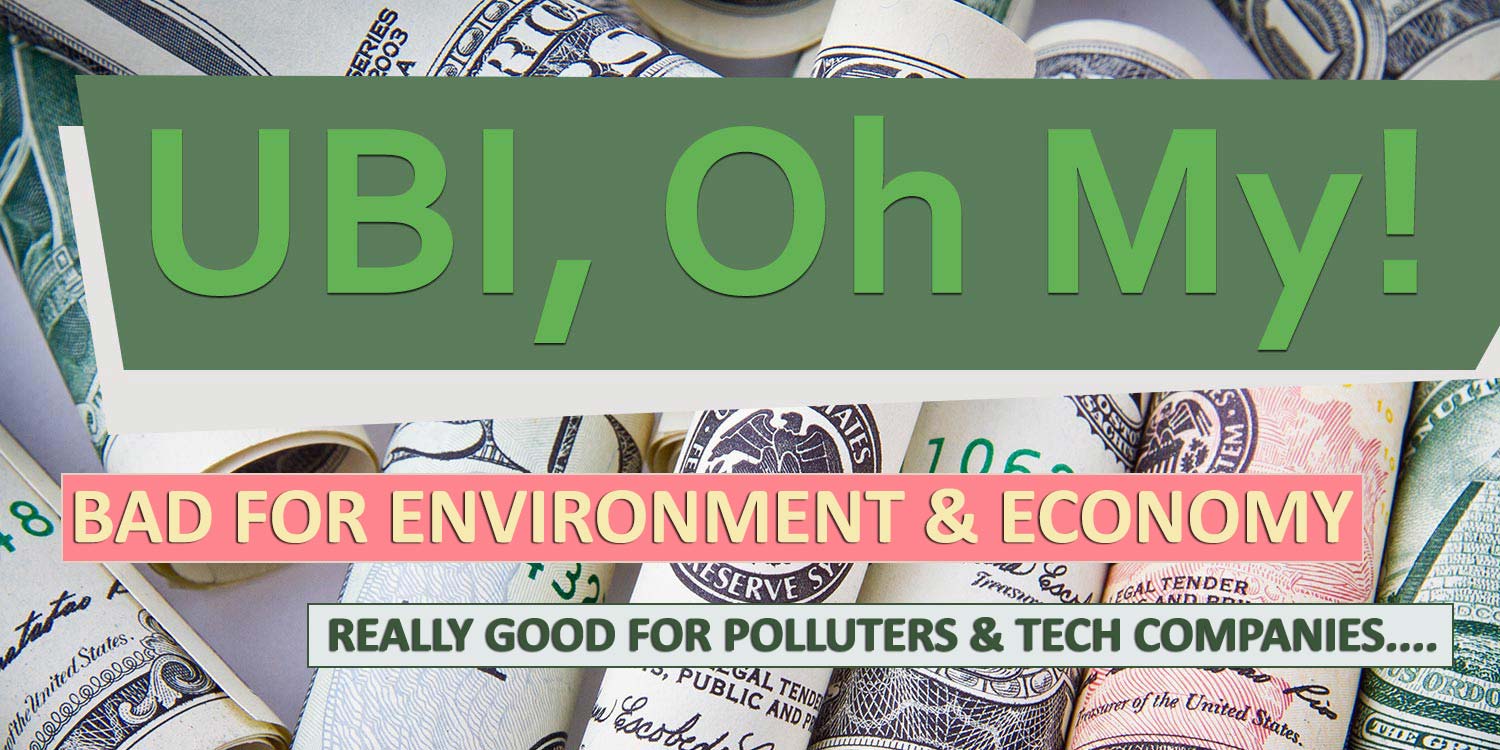 UBI is Bad for the Environment but Helps Fossil Fuel, Big Tech and Large Corporations

It sounds great — guaranteed income paid monthly for every adult man or woman. It is the cornerstone of Presidential candidate Andrew Yang campaign. He calls it the “Freedom Dividend”, promising every US Citizen $1000 a month, no questions asked.

The money could be used to pay bills, go to school, fund a business, pay for housing of the homeless. Finally, some opportunity for those that have not to get their fair share from society.

Unfortunately, there would be some undisclosed side effects.

Putting $12,000 a year into the hands of hundreds of millions of adults would cost trillions of dollars. The money could simply be printed, or issued into the people’s bank accounts automagically. That’s the easy part.

The estimated 2020, the total Federal Income Tax receipts, both individual and corporate, are projected to just over $3 Trillion USD. This includes Social Security, Medicare, and Unemployment (payroll taxes).

Basic economics can explain how having more dollars chasing the same amount of goods will cause the price of goods to go up. The price of capital goes up as well, because capital is used to make goods and services, and the price of those would go up.

An increase in money would raise rents and property values.

Most work sucks. People do it because they have to if they don’t want to live on the streets.

When I was single, without kids and having roommates, the living was easy. I remember because I ran an internet business routing out jobs for satellite TV installs, eventually building a labor network. The calculation went like this:

I needed to average $30 a day to show a profit. I lived like this for years. Though I raised my income, I sure did play a lot of video games. Most of my revenue was residual.

My other option was to work a difficult job. It could be busing tables, delivering pizza, dialing 200 sales calls a day (which sucks by the way), or selling ink toner or car warranties which, which I did for a few weeks each to pay rent.

I had to spend an hour each way for the bus and the job sucked.

That’s a bad example for these purposes; I just want to demonstrate that I’m not lazy. I quit those jobs after the promises of higher earnings never came through.

Think of all the low paying jobs that won’t get done. Maybe it’s a good thing, however, just like a tax de-incentivizes something, like earning income or trading with China (tariffs — a form of tax), free money incentivizes work.

Huge Favor for the Banks and Wall Street

Fractional Reserve Banking allows for banks to lend out money at 9 times their deposits. They then borrow overnight funds from other banks at a low interest rate money they do not have to meet the requirements set by the Federal Reserve in the United States, or similar organization worldwide.

This is a simplified version of the process, however, the system isn’t really that much more complex in design. It allows banks to loan out money, earning profits from interest and has created periods of stability and growth in economies it is implemented in.

If 250 Billion Dollars are deposited into banking accounts each month it will allow the banks to bring into existence much more than that, up to 2.25 Trillion Dollars each month. The amount deposited and staying in bank accounts would vary, and I’m sure there are numbers on this, but it is safe to assume that people wouldn’t be stuffing cash under their mattresses any faster than they do now.

Instead, they would pay inflated bills, rents, mortgages and goods — funneling that money back into large corporation’s banking accounts. Chartered banks can lend, invest or use 9 times their deposits, which would be what is in circulation currently, plus the 3 Trillion Dollars a year that UBI would bring into existence in the United States alone.

The stock market is at all-time highs, allowing large corporations to gobble up their competitors, consolidating capital and stifling innovation. With a Universal Basic Income, inflation would affect all aspects of the economy, including the severity of its crashes.

By Lowering Income Taxes ( Federal, Social Security and Medicare) first, you give every worker in the US economy more money to spend.

They can then pay for pollution without artificially inflating the economy and market prices with free money.

Finally, increasing and funding liabilities like Social Security, Medicare, environmental maintenance and repair to account for the added cost of EmissionsTax. The lower taxes collected that traditionally funded these programs would be offset by revenues collected from Emissions Taxes.