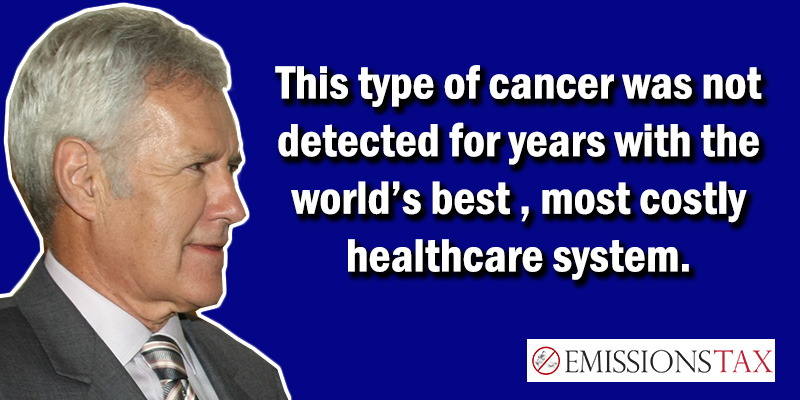 A quick internet search shows from multiple sources that he makes $10 million a year, with a net worth of $50 million USD. That’s a lot of money.

So, here we have a gentleman in the top 1% of earners, not known for his partying or drug use (he hosts a conservative show), and his well paid medical staff could not find his stage 1, 2 or 3 Pancreatic cancer.

Instead, they found it when the prognosis (chance) for his 5 year survival is low. Stage 4. He most likely is going to die.

So how does this relate to the environment?

Well, every action, procedure, work or day of life in modern society creates pollution. The quicker you work, the more you rush, the more pollution is generated. This is discussed in the book, “Incentives an the Environment”.

In a nutshell, people use medical services more frequently when they have insurance. They get redundant tests, unnecessary procedures, and get prescribed medicines that cause side effects and health issues.

Think of all the resources that go into health care – all the electricity, fossil fuels used to smelt the stainless steel instruments, make them hygienic, ship blood and fluids around, in non-recyclable plastic containers cooled to a specific temperature. How much pollution is created traveling to a big city specialist. Heck, all the energy needed to got to routine checkups.

Now, getting back to Trebek’s Stage 4 Pancreatic cancer and it’s vigorous treatment, all to possibly be in vain. So, not only did he most likely go to all those “check-ups” where the cancer was not found in it’s early stages, but now he is literally going to be fighting for his life, using immense resources of the healthcare system.

The hospitals will get their million dollar pay day, and the insurance companies certainly won’t loose any margins (it is estimated that they profit 11% after paying claims and salaries, including multi-millions for the corporate officers). How will the environment fare?

What if this disease, or say one that is surely related, like asthma, is caused by pollution?

That would mean eventually there is a tipping point to the pollution generated from health care and it’s cause of disease.

There is a Humanitarian Need

This limits the human lifespan. This hurts the poor. This hurts the rich, but not as much, for they can afford health care and to live in communities where there is less local pollution; less effects of climate change.

I feel for the sick. I feel for Alex Trebek. I fear my own mortality.

Most doctors and people are good. Some are great. It’s the system that is bad.

People die. They get old. They get unlucky. It is life. Shouldn’t we incentivize good stewardship of the environment and one’s health.

But maybe, just maybe, the healthcare industry is selling something. The idea that with their overpriced services, you can beat the circle of life, to create a better, healthier you.

Finding the price of medical treatment is difficult, and often not until a patient is billed that they find out the costs. Sometimes there are charges for procedures and tests never performed that may get payed for by insurance companies as a valid claim, raising the cost of health insurance for all.

So buy a pink ribbon and toxic dyed t-shirt – just make sure you put on extra deodorant. Dump ice cold water on your head. Run a $50 5k that you drive 45 minutes to wearing a wristband made to last a millennium.

You can make a difference. Just not in curing diseases caused by stress and pollution. Only fair environmental and economic policy can do that.